Alfonso Pérez, owner of Pueblo Meat Supermarket, was honored by ARJ Civic Association with a lifetime achievement award at the association's First Annual Leadership Awards Breakfast held on March 12, 2015 in the Crystal Room of the Robert Treat Hotel. 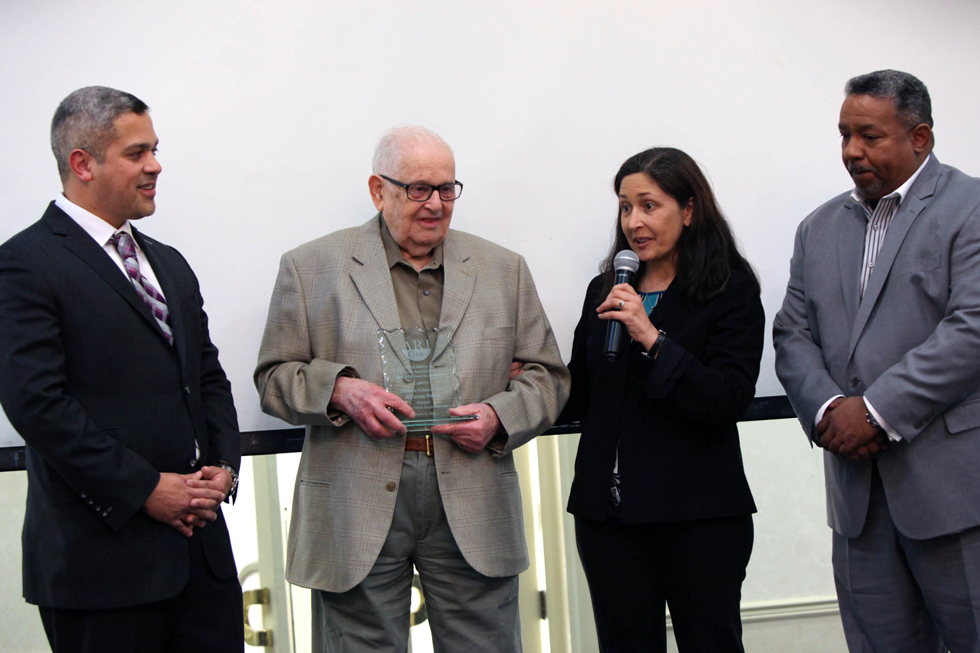 Councilman Anibal Ramos Jr. presents a lifetime achievement award to Alfonso Pérez, who was accompanied by his daughter, and Charles Hall, the president of the Retail, Wholesale and Department Store Union Local 108.

Despite a third grade education, Mr. Pérez, developed skills in his native Cuba that contributed to his lifetime of success.

An avid worker since his youth, at 16, he started his own business exchanging farm chickens for domestic products. Shortly after, he established a thriving food store in his rural town.

In the mid-1960s when the Cuban government nationalized all privately held businesses, he lost his store. As a result of this and other changes that followed with the 1959 revolution, in 1972, he and his family fled to the United States.

Penniless and unable to speak English, Mr. Pérez worked in a textile factory earning minimum wage. Less than a year later, however, he again started his own business by renting a truck to buy produce and distribute it to New Jersey bodegas.

Due to his determination, perseverance, and frugality, he prospered in a thin margin industry and, in 1978 he bought an empty produce market in the Bronx Terminal Market and turned into one of the highest grossing businesses within a short time.

However, years later, after being shot during an early morning robbery, his family convinced him to sell the business to do something safer. To their amazement, he began anew in the supermarket industry in 1985 even though he had never personally shopped for family groceries.

At Twin City and Pueblo Supermarkets he has created community that caters to consumers.

Despite never having learned English and his limited education, he established a chain of supermarkets with over 400 employees, where the 84-year-old still works seven days a week without vacations. The limited time he takes off, Mr. Pérez spends with his wife of 53 years, two daughters, four grandchildren, and a long list of extended relatives.