Stephen N. Adubato Sr., the founder of The North Ward Center, was honored by ARJ Civic Association with a lifetime achievement award at the association's First Annual Leadership Awards Breakfast held on March 12, 2015 in the Crystal Room of the Robert Treat Hotel.

The award was accepted by Adrianne Davis, the co-founder and executive director of The North Ward Center on behalf of Mr. Adubato. 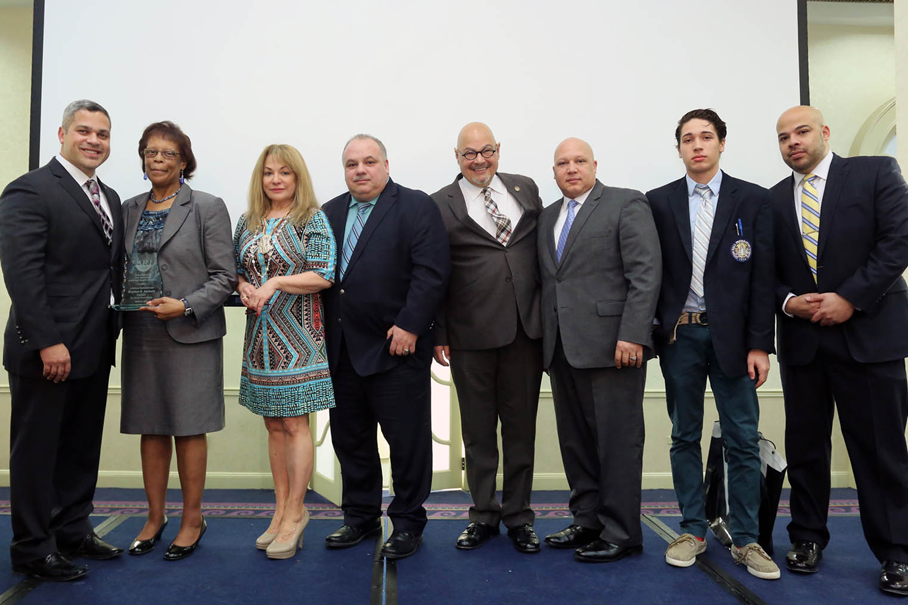 Widely recognized for his tireless efforts on behalf of Newark’s residents, especially in the area of education and social services, Mr. Adubato has consistently worked to improve the lives of others for more than four decades.

From the three- and four-year olds who attend the preschool program he founded to older adults who are cared for at Casa Israel Adult Medical Day Care, the institutions that Mr. Adubato created positively touch thousands of people each day.

Mr. Adubato built The North Ward Center from a small, storefront office on Bloomfield Avenue in 1970 into the thriving institution it is today. During an era of instability, uncertainty and transformation in the city, The North Ward Center served as a pillar of stability, offering job training, education and recreational opportunities to families struggling for survival.

Mr. Adubato began his own career in education as a history and government teacher in the Newark public school system, where he taught for 15 years. While teaching, he obtained a master’s degree in education and completed the coursework for a doctorate in education.

Mr. Adubato served on the Executive Board of the Newark Teacher’s Union and worked as their legislative representative and he was a consultant to the New Jersey Chancellor of Higher Education.

In 1980, the North Ward Center founded the Newark Business Training Institute, which has helped thousands of adults transition from welfare to work and returned more than $1 billion into the State’s economy. NBTI currently offers English as a Second language to ensure recent immigrants have the language skills necessary to find good jobs.

The crowning achievement of Mr. Adubato's life-long dedication to education is the Robert Treat Academy Charter School, which enrolls 450 students in grades K-8. Founded in 1997 as one of the state’s first charter schools, Robert Treat has gained a national reputation for its academic success and was named a Blue Ribbon school in 2008 and has been designated as a "High-Performing Rewards School," for three years in a row by the state Department of Education. The school was named in his honor in October 2014.

In August 2009, Robert Treat opened a second campus in the Central Ward of Newark named after Jackie Robinson, a civil rights leader who was the first African American to play Major League Baseball. Between the two campuses, Robert Treat will eventually enroll 675 students.

Mr. Adubato received a Doctor of Humane Letters from Kean University in May 2010. He received the Official Knight of the Order of Merit of the Republic of Italy, the Medal of St. Benedicts and the Tree of Life Award from the Jewish National Fund.

Over the years, he has been honored by the New Jersey Ballet, the Archdiocese of Newark, the Thurgood Marshall College Fund, the Puerto Rican Congress of New Jersey and the National Organization of African-American Administrators. He is a Class of 2008 inductee into the ASPIRA New Jersey Hall of Fame. In September 2009, he was honored by Essex County, which named the recreation complex in Branch Brook Park the Stephen N. Adubato, Sr., Sports Complex.